Posted by admin on April 8, 2012 in History | Comments Off on St Patrick’s Condah 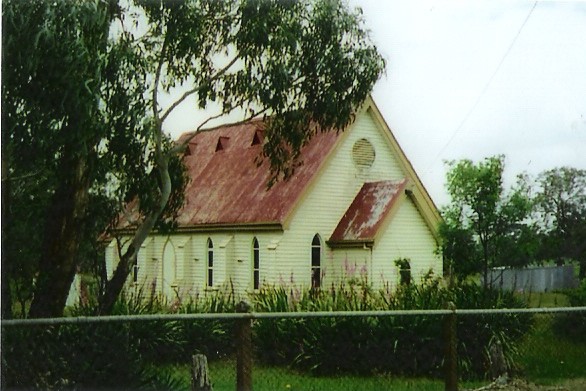 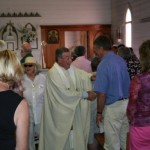 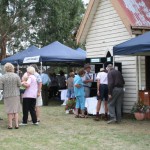 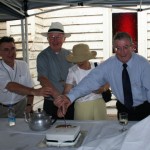 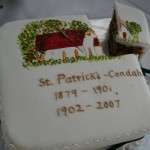 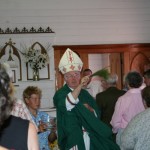 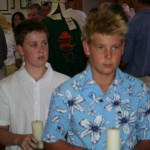 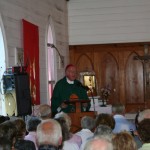 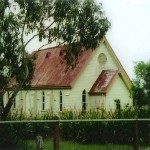 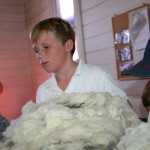 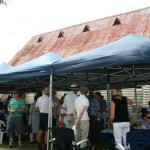 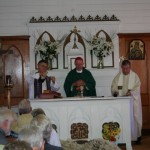 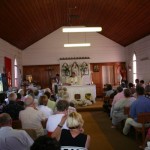 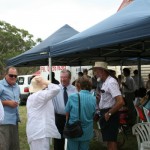 Bishop Peter Connors, Fr Pat Mugavin and Fr Paul Gurry officiated a final 10.30am mass.  The service ended with a short ceremony outside.  The congregation formed a guard of honour, while the clergy led by Bishop Connors officially closed the church.

Lunch was then served under a marquee where families and friends reminisced about the days gone by.  The original Condah church was built in 1879 for ₤200 (pounds).

In 1901 it burnt down during the Black Friday fires and was rebuilt the following year in 1902 for ₤400.  That same year Condah became attached to the parish of Hamilton.

In recent times the congregation has numbered just give people, thus the decision to close the church had been made.  It is yet to be decided what will happen to the money from the sale of the land, building and its contents.  Fr Gurry said some suggestions had been offered including the building of a church in East Timor but that the final decision was to be made by the finance committee whose president is Fr Gurry’s brother.

Located just off the Hamilton – Portland Road, the aged church building spilled over with visitors, welcomed back by the local community to celebrate the life of the church.  Descendants of Condah’s pioneering families travelled great distances to share wonderful memories of a once thriving congregation, with some members participating in the closing service.

Bishop Peter Connors officiated the closing Mass on Sunday 18 February 2007, along with Fathers Pat Mugavin and Paul Gurry.  The occasion had special significance for Fr Gurry whose family were past residents in the district.  A book prepared for the day included memoirs from past parishioners.  Fr Gurry wrote of happy memories of a country church, including “enunciating Latin with great enthusiasm” during his role as Altar Boy.  Others spoke of the warmth and love amongst a community who gathered regularly, united in faith and friendship.

“Church was an important part of life when staying at Condah, and my memories are of the small church, “our seat” (the Gurry’s) up the front on the left side and especially the care my grandmother took to always prepare the thermos and sandwiches for the priest after Mass. “

“The best thing about the CondahChurch was that it had its very own confessional box down the back and I didn’t have to kneel at the Altar rails.”

“For our father to travel to Condah by car to see his mother was not possible, as our wartime ration of petrol was four gallons a month.”

Following are extracts from the Portland Guardian Newspaper 1879 – 1901

As the Roman Catholic Church at Condah is now all but completed, the consecration will not be long delayed.  The building is of wood and substantially built; the roof is of iron, with a quick pitch and as the height to the eaves is at least fourteen feet the ventilation is good.

The Rev J O’Donoghue of Portland has already celebrated Mass in the church.  When finished the structure will have cost ₤200 and it is not improbable that in time, a school will be added to the church. At present young children in the neighbourhood have a long distance to travel.

On Sunday last, March 30th, the Catholic Church at Condah was solemnly opened and blessed by Bishop O’Connor.  Accompanied by Fr O’Donoghue, his Lordship proceeded to Condah on Sunday morning from Heywood.  He was met on the road out some miles by a large number of resident Catholics.  The ceremony of blessing the church commenced 11 o’clock.

Mass was celebrated by Fr O’Donoghue, at the end of which his Lordship taking as his text the words from the Gospel of St John –  “He that is of God, heareth the words of God”- preached a very elegant and impressive sermon.  He was listened to with the greatest attention, not only by members of his own flock, but by a large number of persons of other denominations who were present, who expressed themselves highly pleased with what they had heard.

There were about 200 persons present, several having come from Portland, Heywood and Branxholme.  The Catholics of Condah are to be congratulated on having at length a little Church in which they can assemble to worship God.  The church is 40ft long by 20 ft wide, quite large enough for the congregation.  When the ceremony was ended a few of the leading gentlemen presented an address to his Lordship, congratulating themselves on the auspicious occasion which brought him amongst them for the first time and alluding to the kind assistance they had received from their Protestant friends – to which his Lordship made a very kind and feeling reply.  During his stay at Condah, Dr O’Connor was the guest of  Mr McDonald.

The Condah Catholic Church building, together with the homes of Mr McDonald and dozens of other residents, were destroyed by fire on the previous day during Black Friday Fires.  Newly laid carpet at a cost of ₤30 and a recently acquired communion plate were amongst the items destroyed in the fire.